It is imbecilic to carry on fighting US wars 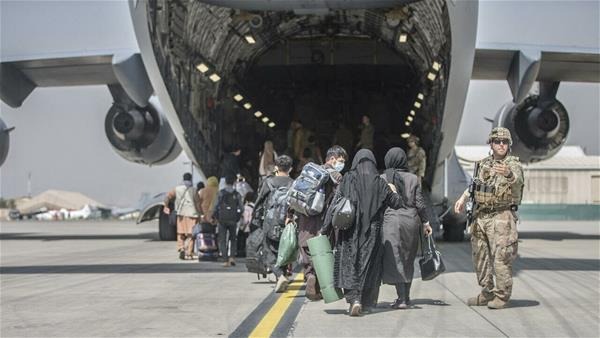 The debacle in Afghanistan is far from over and will have ripple effects for years to come. The Western powers led by the US committed themselves to removing the Taliban, rebuilding the country and installing a functioning democracy with much greater equality. None of that has happened despite twenty years of bloodshed, destruction and death. We will soon see whether Britain and other Western countries will face up to their responsibilities to take in large numbers of refugees.

So, it is bizarre to see Western commentators as well as former Prime Minister Tony Blair criticise the decision to withdraw as ‘imbecilic’. Like the Bourbons they have learnt nothing and forgotten nothing.

Some of us opposed the war at every stage, because it was wholly misconceived and morally indefensible. The idea of bombing and invading an entire country ostensibly to go after the former Western ally Osama bin Laden is preposterous. Yet this is what was claimed for the initial aggression against the people of Afghanistan. That NATO, purportedly a defensive organisation centred on the North Atlantic found itself at the centre of the action, only adds to the sense of the absurd.

The brilliant military strategists now clamouring for never-ending war failed to learn any lessons from history, either from the British Empire in Afghanistan or from the later failures of the Soviet forces. The Mujaheddin and other forces that the CIA unleashed against the Soviet-backed government in Kabul, and who gave rise to bin Laden and al Qaeda, were to prove the forerunners of the Taliban. The same Taliban that is now the nemesis of dreams of Empire.

But still those dreams persist. It is reported that Ben Wallace, no doubt under the instruction of his good friend Boris Johnson, was ringing around Western capitals in the hope that NATO forces minus the US could hold back the Taliban tide, even after the might of the US had failed to do so. The calls seem to have been given short shrift.

It is completely delusional for Western commentators, British officials and Tony Blair to believe there was a different course of action that could have saved Afghanistan from the insurgents. It was always unrealistic to believe that the machinery of war could lead to pacification of Afghanistan, let alone its development as a liberal democracy under military occupation. It is deranged to pretend that Britain could have played or could still play that role when the US could not.

There is almost a wilful disregard for the relative military capabilities of the US and of this country underlying these pretensions. There is too a complete disregard for the lives and views of ordinary Afghans.

I was horrified by the situation in Afghanistan when I travelled there in 2010 as part of a parliamentary delegation. I wrote immediately on return that a timetable should be set for withdrawal. Soldiers told me that the Western forces were widely regarded as an army of occupation. Under those circumstances, we were never going to win hearts and minds.

At the same time, it is well-known that the Afghan terrain is ideal for an insurgent or guerrilla force. The US and its allies had unified their enemies and did not have the means to defeat them.

In addition, the level of widespread corruption was already apparent and the production of opium was soaring. Everything that the apologists for the war said would not happen was well entrenched. All the claims made by the architects of the war, such as Tony Blair were proving to be completely false. This was true 10 years ago, just as it was true 20 years ago.

The cornerstone of British foreign policy over decades now lies in ruins. Ever since Suez British governments have decided no truly independent foreign policy was possible and our fate was as an aide-de-camp for the US war machine. This meant that wherever that machine roamed, we had to be there, however dangerous it might be to British forces or our own interests, or however flimsy the pretext.

If there were no good reasons for the war, Britain would help invent them. Tony Blair, we can be sure, does remember ‘weapons of mass destruction’ and sexed-up dossiers. But he would do it all again, even if we now cannot ensure the safe return of our own citizens from Kabul, still less the safe passage of those who worked for this country.

It is no use bemoaning Biden, or abusing him personally as ministers now reportedly do. Trump also wanted to withdraw US troops and had a peace agreement with the Taliban to achieve that. The overwhelming majority in Washington wants out. And if the shareholders of arms manufacturers are unhappy, they may not have to wait too long for another major campaign, Iran perhaps, or China.

It would utterly stupid, or imbecilic in Blair’s word, to follow the US down its next road to war. The US will not protect this country from far more powerful enemies than the Taliban. The ‘special relationship’ did not merit even a phone call for advance warning of the pull-out.

Instead, like other prosperous European countries we could adopt a pro-peace, pro-development foreign policy. We could welcome as refugees the Afghans we have so badly let down, far more than the government intends. We could cut offensive military capabilities and adopt a purely defensive posture. We could use the money saved to restore the aid budget, and increase social spending here. Above all, we could make our priorities based on principles of decency and mutual respect, not war-mongering and never-ending conflict.